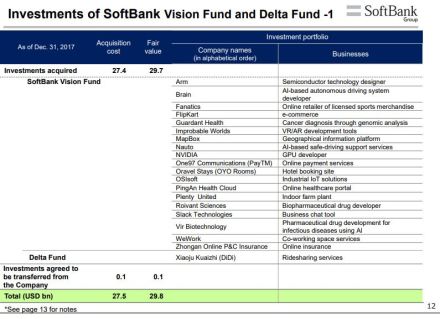 Share price SoftBank Group, an $89.2 billion investment holding company led by the 83rd richest man-Masayoshi Son, has fallen 12% from its peak since November.

SoftBank also created its $100 billion Vision Fund in 2017 and about $32.5 billion of which is funded by the company itself as of December.

This week, SoftBank just reported its recent nine months operations that ended in December 2017. The Son-led entity delivered 3.5% rise in revenue and 20% increase in profits.

In the past three years, SoftBank raised ¥4.1 trillion in financing activities and had free cash outflow of ¥86 billion.

Ignoring the heavy debt figures and wanting to risk capital to have some exposure in some of the world’s rising tech companies, SoftBank may be a worthwhile risk.

Disclosure: No shares in any companies mentioned.