Disclosure: I am long Meralco and PLDT. In addition, I am not a professional financial analyst/advisor. I am not getting paid to do this research and only consider this as a hobby. This article was made on 8/31/2015.

Hello fellow Filipino investor,
It appears that our mini-poll revealed more people interested in the Industrial sector of the Phil. Composite.

This is the method how I arrived with comparing the listed companies in the sector.

***A note or two before we proceed:
A. Ranking listed companies by market cap may not be the most optimal way in determining which are the best, but only gives us insight whether or not the companies included are liquid enough for buying shares when decided upon.
B. The comparison I will make is not an ‘apple to apple’ comparison but will be an ‘apple to orange’ kind of comparison given the nature of the selection process.

These companies are the top 10.

Based on this finding, ocular inspection would reveal that some of the listed names are very familiar for us part-consumers.

Next, I would then find which company has the largest NET INCOME. According to Wikipedia, it is an entity’s income minus cost of goods sold, expenses and taxes for an accounting period.

TTM NET INCOME data revealed the following (According to Investopedia, TTM means Trailing Twelve Month; A company’s trailing 12 months is a representation of its financial performance for a 12-month period, but typically not at its fiscal year end): 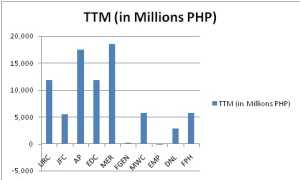 This may be ‘unfair’ when we had to compare a fast food chain (JFC) and a snack food business (URC) against these giant power-producing firms (MER, AP, etc.), but that is the weakness of this research. Maybe it may bring some comfort starting from here that Tony Tan Caktiong’s JFC and John Gokongwei’s URC may be isolated in terms of comparison for those who are willing to since they are both in the ‘food consumer’ trail.

Next, let’s use Buffett’s TTM Return on Equity (ROE) criteria. The higher the better, but take caution. High ROE can be a result of a company increasing its debt. As a result, the company with a high ROE can be susceptible during cyclical downturns or recession. ROE is solved through Net Income/Shareholder’s Equity. TTM ROE provided: 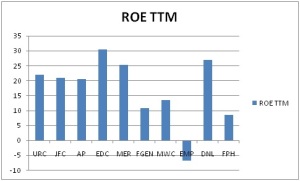 Despite URC and JFC lagging in the net income aspect, here it shows these companies are almost at par with its peers in the industry (generally comparing). EDC, DNL, and MER were outstanding while EMP is still in the RED.

Next, we will see these companies’ TTM debt to equity (DE) ratio. The lower, the better. In addition, this would justify if a company’s ROE is brought by increased debt. A better approach would be comparing ROE with Financial leverage, but we would skip that one today. According to Investopedia, debt ratio used to measure a company’s financial leverage, calculated by dividing a company’s total liabilities by its stockholders’ equity. However, in this scenario, I simply added short-term and long-term debt plus capital leases (if available) divided by total stockholder’s equity. 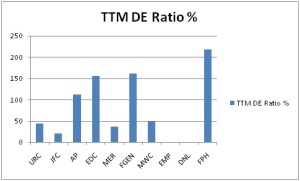 As a result, FPH lead the group in debt (not good). This followed by the other listed power producers. On the other hand, EMP and DNL do not have any debt. (Makes me wonder what EMP is doing to increase their shareholder return—disappointing so far). JFC, URC, MER, and MWC appear to have the most conservative DE ratio in the industry.

Now we go to the juicy part, measuring the listed companies’ profitability. We will be using gross profit (GPM) and operating profit margin (OPM). According to Investopedia, GPM is calculated through deduction of cost of goods sold from revenue divided by total revenue. OPM is calculated by operating income over net sales. GPM is money left over from revenues after accounting for the cost of goods sold, while OPM is measurement of what proportion of a company’s revenue is left over after paying for variable costs of production such as wages, raw materials, etc. Thus GPM is a good criterion, while OPM is more stringent. Buffett usually asks for >40% in GPM. GPM is as follows: 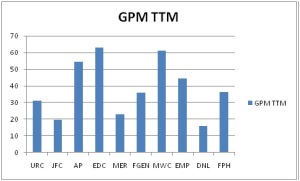 This table revealed that EDC, MWC, AP, and EMP are above the 40 level. Technically, they get to ‘keep’ more than 40% of their revenue. OPM revealed the following: 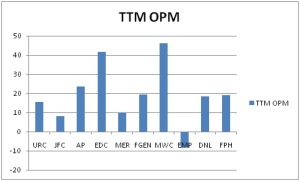 Next part, we will use some of Benjamin Graham’s criteria, which is the earnings per share (EPS) growth. EPS is calculated by net income/average outstanding common shares. Moderate growth is okay (when compared among peers). For this, I used a Compound Annual Growth Rate or CAGR instead of averaging the companies’ EPS growth over the years. According to Investopedia, CAGR is the mean annual growth rate of an investment over a specified period of time longer than one year. This part is tricky since some company/ies were just listed in the Philippine Stock Exchange just a few years ago (EMP and DNL), while others were listed longer. Be skeptical about this data (as you should be in everything that was written in this article). 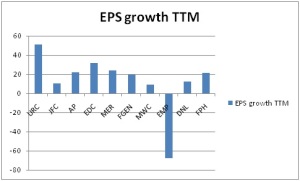 Last but not the least, the dividend growth (DIV). I personally invest for dividends. I usually double-triple check a company’s historical financial performance (such as FCFE ratios, etc.) before purchasing (caution: historic performance does not translate to future performance). According to Investopedia, A dividend is a distribution of a portion of a company’s earnings, decided by the board of directors, to a class of its shareholders. Dividends can be issued as cash payments, as shares of stock, or other property.

Before heading onto the DIV CAGR, it’s interesting to know how much really these companies payout to their shareholders currently. See table for the dividend rate. 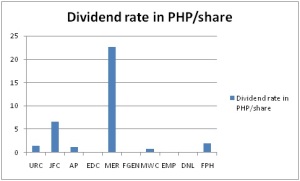 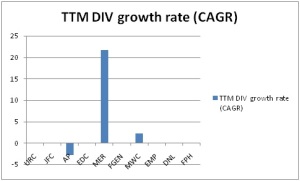 This data above must be taken with caution. First, not all companies have been historically giving dividends (at least according to my sources). MER may be the highest DIV growth payer, but they just started giving out dividends just 2014. Most other companies, on the other hand, had just issued their dividends not more than three years ago. (A personal note, I remember when I was still preparing for the Securities Exchange Course in 2011, I assume that was the time when foreigners had been allowed to plow in more investments in the Philippine Stock Exchange-Nevertheless, I guess some companies then initiated to return some dividends to their shareholders as a courtesy to uplift shareholder return).

Anyhow, this concludes my brief review in the industry. 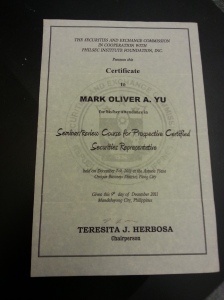 After double checking with the listed company’s OWN ANNUAL REPORTS, it appears that some data did not match. That is why performing due diligence is important. However, if anyone is to ask me whether or not I should believe ALL of the data stated above, I would still. Because that’s how I perform my research. Invest at your own risk.

Here are some data that did not MATCH:
MERALCO’s dividend
According to the article, MER started dividend just last year (2014), however, checking MER’s annual report–dividend has been ongoing since 2006 (stopped at 2007), but still continued til present.

In addition, EMP (which I’ve accused of no earnings) had shown EARNINGS in its Phil. Stock Exchange FIlings. 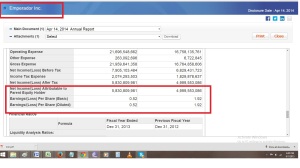 Nevertheless, some data matches, like EDC’s ROE among others.

Again, I would still encourage due diligence among the avid investors. But for me, I would still believe my researched data.
Links to some of the information mentioned are as follows: